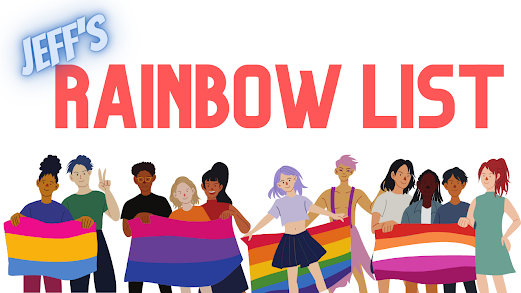 June marks Pride month and one of our staff members has compiled a list of some great LGBTQ+ reads for you to help celebrate!

Aristotle and Dante Discover the Secrets of the Universe by Benjamin Alire Sáenz - Two young boys discover their feelings for each other in this heart-racing tale. You'll be on the edge of the page wondering what happens throughout the many twists and turns of their story together.

What If It's Us by Becky Albertalli & Adam Silvera - Ben and Arthur meet, by chance, at a post office in New York. It is a touching love story that will keep your heart pounding with its realism. Soon to have a sequel later this year titled Here’s to Us, now is the perfect time to read this novel.

Love, Simon [DVD] - A first for a blockbuster film, Love, Simon, is a major motion picture that focuses on a gay character. The movie uses a blend of comedy and suspense to capture the audience and develop the connection with the characters. It can be intense as there are scenes of bullying and blackmail, but it touched my heart as I watched it.

Simon Vs. the Homo Sapiens Agenda by Becky Albertalli - This is the book that the movie Love, Simon is based on. It features a closeted gay character, Simon, as he deals with bullies and tries to find out if anyone else from his school is like him. Unfortunately, someone else discovers his secret and threatens to leak it out if he doesn't help him.

In Other Lands by Sarah Rees Brennan - Bestselling author Sarah Brennan paints the picture of a fantastical world hidden within our own. Young Elliot is thrust into "The Other Lands" when he realizes that he is one of the few humans that can see the wall that divides the mystical from reality. He braves the waters of political unrest while balancing his feelings for his classmates.

They Both Die at the End by Adam Silvera - A tragic love story that takes place in a world where you get notified before you are expected to die and you have a 24-hour window to get your affairs in order and live your final hours to their fullest. Read it now before the TV series comes out on HBO!

The Secret Loves of Geeks by Hope Nicholson and Chris Roberson - This fun piece of Non-Fiction blends graphic novel with informative stories and experiences. A great read for anyone that has participated in cosplay or is just into geeky fandoms.

The Bane Chronicles by Cassandra Clare - This is a spin-off novel to The Mortal Instruments that focuses on the boyfriend of Alec Lightwood. Magnus Bane affectionately dubs himself a "freewheeling bisexual," and it covers many of his adventures around the world including the romances faced throughout his life.

The Art of Being Normal by Lisa Williamson - A boy struggles with his feelings of being transgender. His parents believe him to be gay, but his friends know the truth. One day another boy stands up for him in a school fight, and a friendship quickly forms between the two.

The Difference Between You and Me by Madeleine George - In this story two girls hide their romance as they deal with their feelings for each other. One feels that they should be open about who they are, but the other feels that they are risking too much to let it out. When they end up on opposing sides of a school wide argument, they must make the decision of love vs. beliefs.

Cemetery Boys by Aiden Thomas - This is a story of a trans boy that is part of a traditional Latinx family. It has some fantasy elements mixed in with the drama of a young boy that is trying to prove that it is okay to be transgender and that the gods do not hate people based on their sexual orientation. I was fully immersed when reading this gripping YA Romance.

As Far As You’ll Take Me by Phil Stamper - Marty Pierce is a musician from small-town Kentucky that wants to get away after he graduates in order to explore his sexuality and discover who he is. He moves to London under the guise of studying abroad in a music camp. Then he does all that he can in order to try and make a living so that he can make the move permanent.

More Happy Than Not by Adam Silvera - Oh Adam Silvera, how you tease me with romance just to drag my poor heart through the mud. Aaron Soto lives in the Bronx and deals with everything that one would hope that someone in the LGBTQ+ community wouldn’t have to go through. It has a slight Sci-Fi element to it that will keep you wondering what will happen next.

The Gravity of Us by Phil Stamper - Cal is an aspiring journalist, current social media personality, whose father is chosen to become an astronaut for NASA’s mission to Mars. This forces his family to move to Texas in order to be closer to NASA’s headquarters. Emotions run high as family members butt heads under the stress of the situation while being watched by the pressing news media.

Only Mostly Devastated by Sophie Gonzales - What happens if you have the chance to make a summer fling a permanent thing? That is the exact opportunity that Ollie is given when he discovers that his new High School is the same school that his fling goes to. Go on the journey as you join Ollie in discovering how people wear masks when they are around others and see what happens as the two teens try to establish what they mean to each other.

Date Me, Bryson Keller by Kevin Van Whye - Bryson Keller is your typical jock, and at a party his friends decide to test him by daring him to date a new person each week, starting with the first person to ask him on Monday morning. However, they didn’t expect that person to be a boy. Kai is frustrated with the stresses of school but decides to ask Bryson out. He didn’t expect a yes yet must accept the consequences. The two get to know each other and a relationship begins to form, but is Bryson ready to come out?