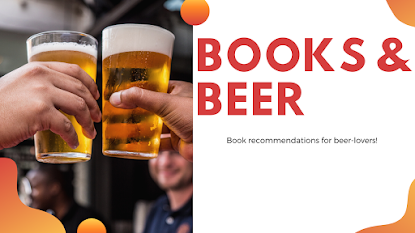 This month we will be looking at books specifically about beer!  Please remember to drink responsibly.

If you are a beer connoisseur, you are probably already aware of Oktoberfest and National American Beer Day. If not, those are just the two of many celebrated events around the world. Oktoberfest was originally a horse race to honor Prince Regent Ludwig of Bavaria, the later King Ludwig I, and Princess Therese of Saxony-Hildburghausen in October of 1810 for their upcoming nuptials. This event was created by Andreas Michael Dall’Armi, Member of the Bavarian National Guard, who would later in 1824 be awarded the first citizens gold medal for inventing ‘Oktoberfest’. Internationally Oktoberfest is celebrated from September until the first Sunday of October for a total of 16 days.

The National American Beer Day is observed October 27th and celebrates all American Beers produced by more than 3,000 breweries in America. The most common beer style in America is the American Lager.

Here are a few books that we’ve read that quenched our reading. Get it? Quenched? Because we’re talking about drinking? Nothing? I’ll leave the puns to someone else and stick to reading.

Beer at My Table: Recipes, Beer Styles and Food Pairings by Tonia Wilson

A chef and beer connoisseur, Tonia Wilson has crafted a book that pairs food and beer styles that non-cooks like myself can create. Salt Cod Fritters with Spicy Mango Chutney Dip paired with a Pale Lager had simple instructions and would be easy to make in an hour. There are more advanced recipes, such as the Steak Tartare with Charred Peppers and Lemon Chive Mayonnaise paired with a Trappist Ale. Overall, the recipes listed in this book are a great way to try out new beer styles.

Will Travel for Beer: 101 Remarkable Journeys Every Beer Lover Should Experience by Stephen Beaumont

Yes, we are still at home, but that doesn’t mean we can’t find a way to travel around the world via books. In Beaumont’s book, you are given different experiences celebrating beer from diverse cultures. He describes different pubs, events, and hotels that you can visit on your travels that highlight contrasting drinking experiences.

Lucy Burningham started out as a journalist, but ultimately decided that she wanted to have a career change. That career change was to write about craft beer. In her autobiography, she takes the reader on an adventure that will peek your curiosity on breweries, festivals, and the people that are passionate about beer. As someone who does not drink, this book gave me an entrance into a world that I was unfamiliar with.